He was elected as a member of parliament from Jhapa constituency no. 6 in 1991. He held the post of chief of the foreign department of the CPN (UML) in 1992.He was elected as Prime Minister in a parliamentary vote on 11 October 2015,. Oli’s PM candidacy is supported by the Unified Communist Party of Nepal (Maoist), Rastriya Prajatantra Party Nepal, and Madhesi Rights Forum-Democratic along with 13 other small parties. He was sworn in on 12 October. Oli was appointed as Deputy Prime Minister and Minister of Foreign Affairs as part of the interim government of Girija Prasad Koirala in 2006. He was also assigned to look into the death of fellow politician Madan Bhandari. 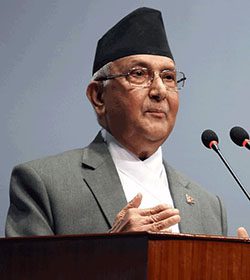